skip to main | skip to sidebar

8th December 2013 marks anniversary of their silence to our request to film at St Chad's cathedral Birmingham.

This week,8th December 2010, marks the 1st anniversary of the installation of Archbishop Longley to the Roman Catholic Diocese of Birmingham.We wrote to him at the same time asking for clarification of the Video Policy that was supposed to come in force after we were banned from filming in Birmingham Cathedral Easter 2008 at Archbishop Nicholls' final Easter service.It was Bishop Kenny, who was the temporary Bishop in charge of affairs at the time, until Archbishop Longley was installed, that wrote us the letter saying that a new policy would be put in operation by the new Archbishop.
To date we have had no reply apart from the acknowledgement from his secretary.
We wonder why, perhaps they have just had far too much to think about with all the Papal business and other matters that the media were interested in.
Likewise we have never been told why we were stopped from recording events at the cathedral apart from the fact that "certain people objected".
In the wider view of things it is not important to Aston Vision to use the cathedral for its media training operations with Migrants. There are other locations, and other faith groups who have no such objections to helping us with our aims of migrants media training, which has many positive "spin-offs". Not least of showing those of other faiths how the Christian Church in the form of Roman Catholicism conducts its worship ceremonials.
Posted by Michael Tye at Saturday, December 07, 2013 No comments:

Future of Cycling in Brum

Is the future of Cycling in Brum? these guys had come from West Brom via train to Hawthorns to Birmingham Carnival 2013 in Handsworth Park, but were refused entrance by security: come on Organisers, be real ! 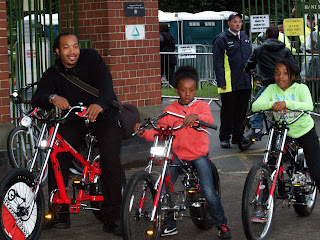 or what about this Cool method in town if we had the cycle lanes properly laid down, first spotted on Birmingham Cyclists Blog Videos at   http://www.birminghamcyclist.com

http://birchfieldresidents.posterous.com/handsworth-lozells-community-team-cohesion-ne#
Posted by Michael Tye at Tuesday, May 24, 2011 No comments:

Have a nice day

The outgoing Lord Mayor who has a keen interest in all things IT has invited the children to communicate with him at the Lord Mayor's parlour using their new IT facility which he opened today at the school.Birchfield Bugle will have a full feature on the school visit in its next issue

Using a FLIP camera in our neighbourhood

Whilst Blogger was off air, (or whatever the Bloggersphere equivalent is), I popped a post on the site that I set up during the Social Networking workshop with PODNOSH.The clip can also be seen at http://birchfieldresidents.posterous.com/the-value-of-flipping-in-making-us-aware-of-l I am really pleased with the quality of this tool to report community issues and hope to integrate clips into our rather more static website at www.brag.btik.com, although I suspect BT have not allowed for this facilty (video downloads)in their community web site Templates.So here's our first Street Clip..........
>........http://evcwm.org.uk/2011/05/04/four-flip-cameras-to-give-away/
Posted by Michael Tye at Friday, May 13, 2011 No comments: